Christmas Around The World ORNAMENT Crafts 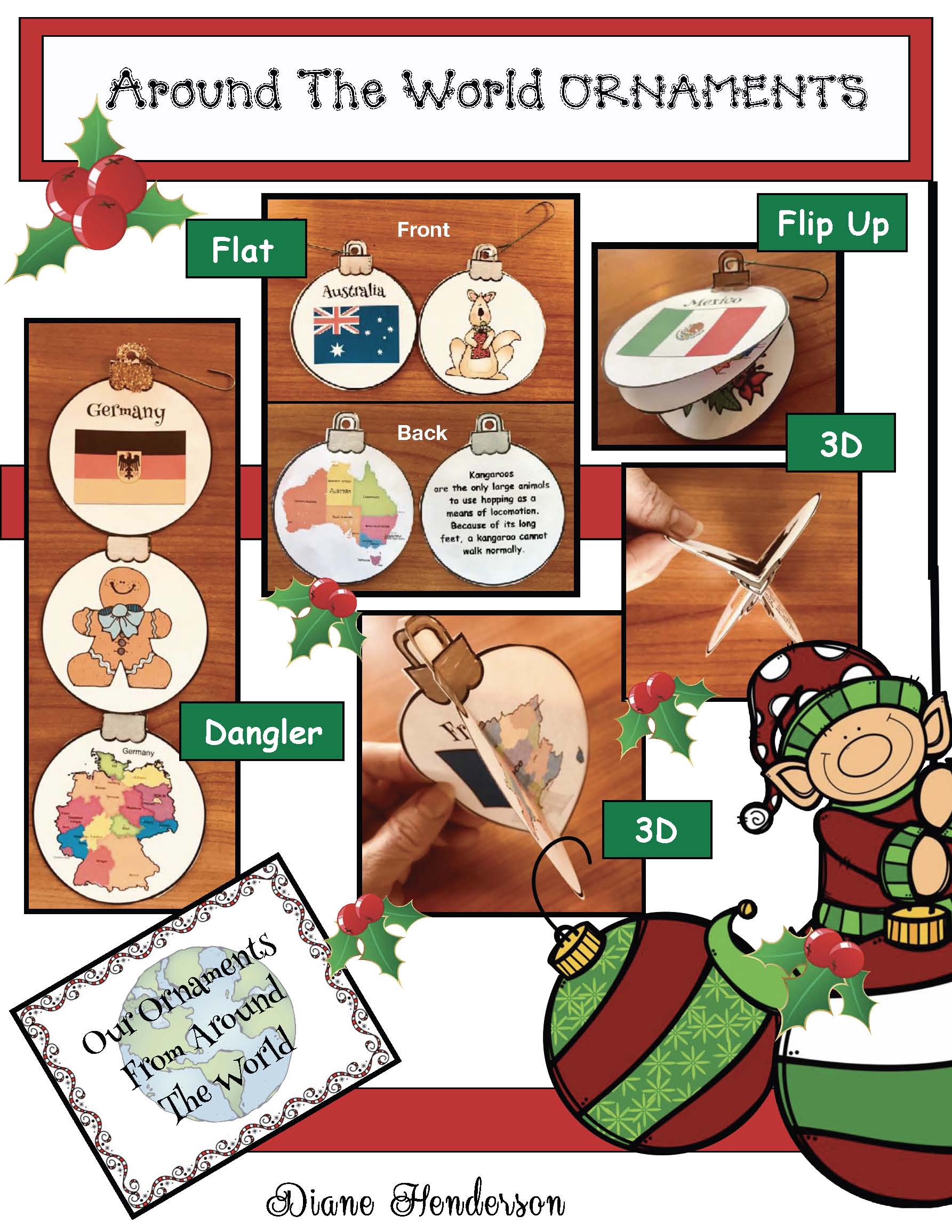 Few of us have the time or luxury, of being able to do a craft “just because”…

And because of all those positive things, I wanted to design something “extra special” for the holiday season, that’s quick, easy and fun, as well as very educational, to make even the Grinchiest of Bah Humbugs smile their approval. 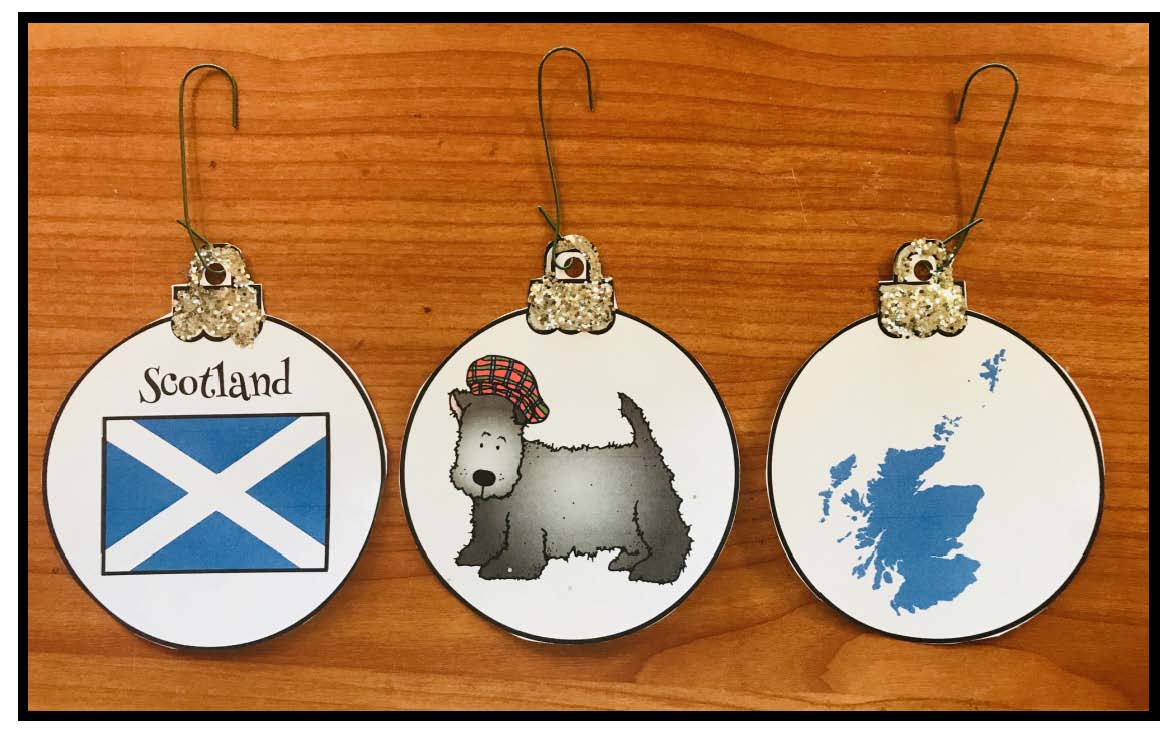 Since many teachers dare to dally with a bit of craftiness during December, especially with their Christmas Around the World geography lessons, I designed this set of “Around the World” ornaments.

Each ornament features the country’s flag, a map of the country, as well as a sweet graphic, which people readily identify as being symbolic of that country. i.e. The Eiffel Tower for France.

You decide how you want to make each country’s 3-part ornament as well. There are quite a few options: 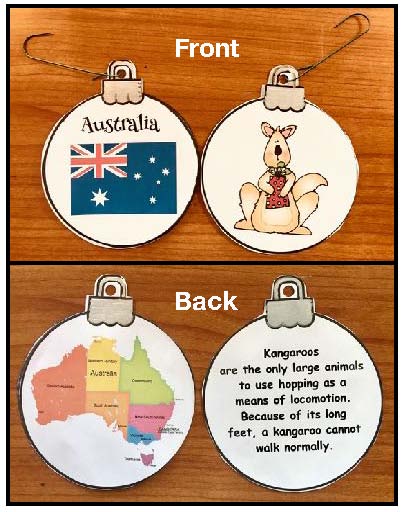 They can be kept as three, single flat ornaments, or add the "blank" ball and use it for a writing prompt, then glue them back-to-back to make two, flat ornaments.

For added sparkle & pizzazz, I added gold and silver glitter to the "metal" top of the ornament.

Another easy-peasy option is to simply staple the 3 balls at the top to make a "flip up" ornament.

Add a blank-ball page in-between each one, so older students can describe the flag on one, write an interesting fact about the country on another, then explain what the symbolic picture balll means on the other.

Children an also make a "Dangler" out of their ornmaments, by gluing them together vertically. They look wonderful suspended from the ceiling as a wall border in the hallway. 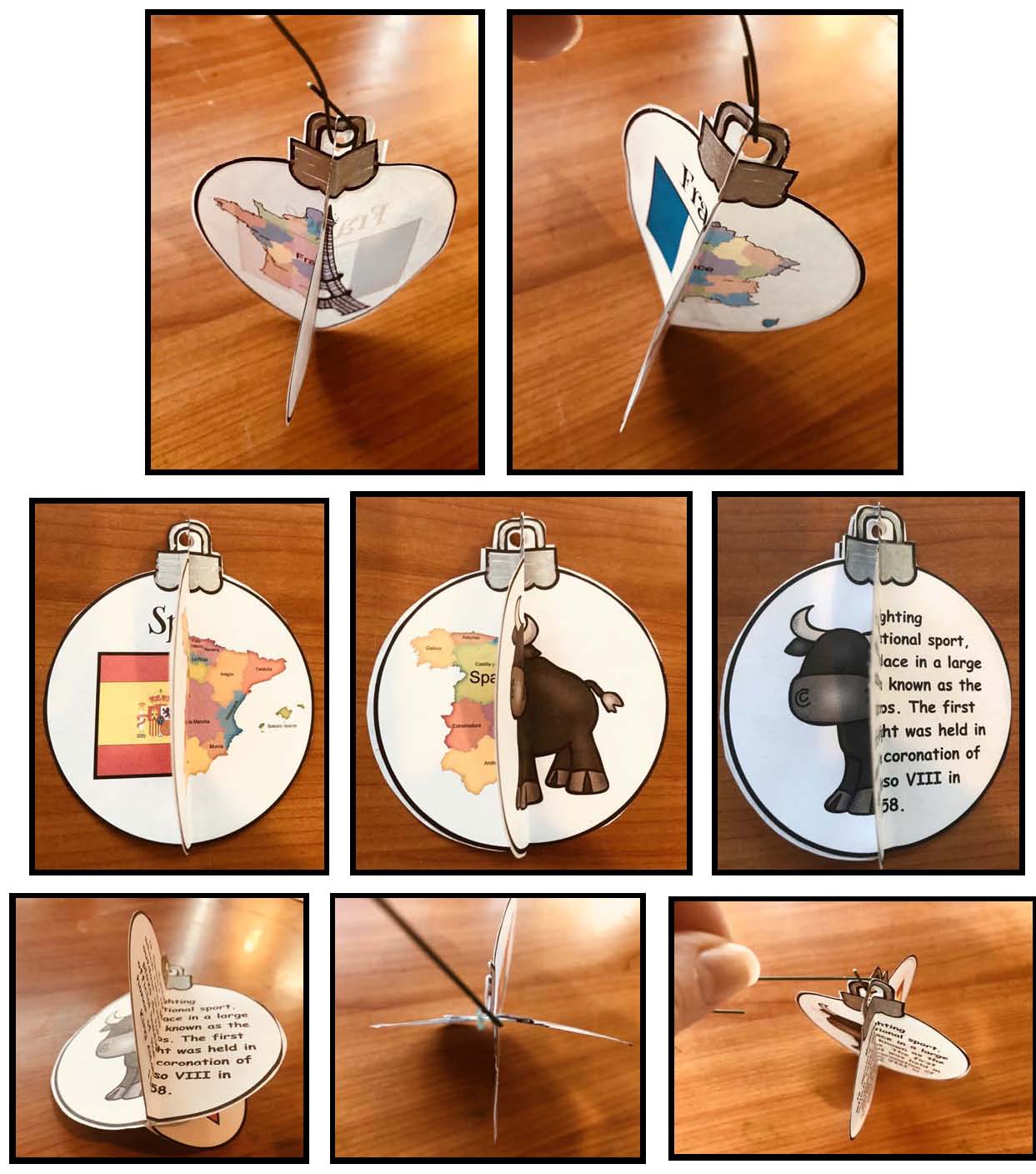 Finally, my favorite way to make them is to fold the balls in half,  and glue them together to make a 3D ornament with either 3 or 4 sides.

How you use the ornaments is also up to you.
- As a whole group activity:
Do that country’s ornament as a culminating lesson when you’ve finished studying about it.

Easy-peasy: No more thinking about what craft to match up to the various countries, buying materials & then spending hours prepping. 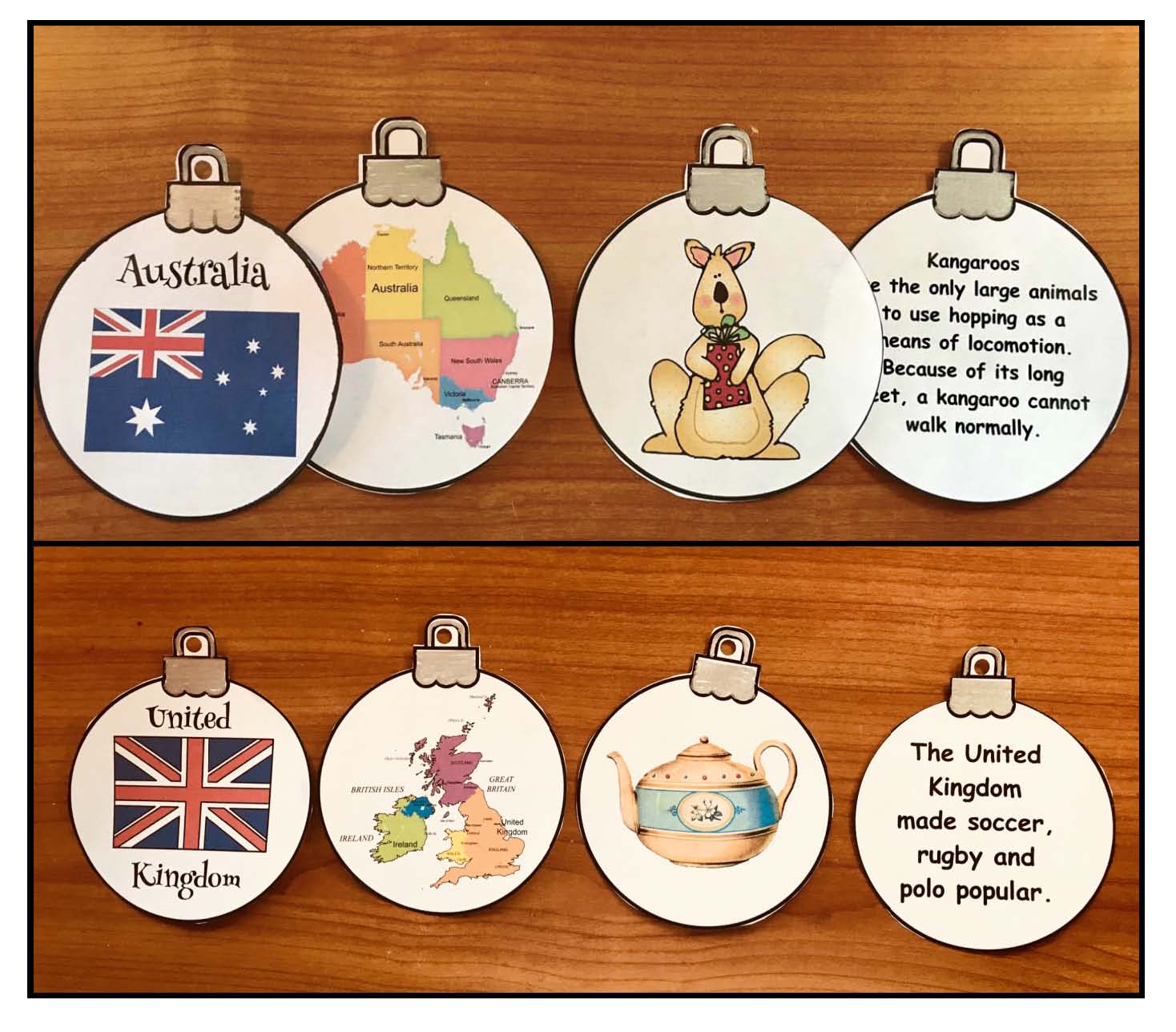 These are “print & go”, plus, once you’ve explained the directions the first time, you no longer need to spend time doing that again. Another country—a new ornament.

Children feel empowered by the consistency, and can get right down to business; plus, they enjoy collecting them, much like they would a souvenir ornament from that county.

The beauty of even the 3D ornament, is that they fold down flat, and can easily be tucked into students’ “Around the World” suitcases after you're done displaying them. 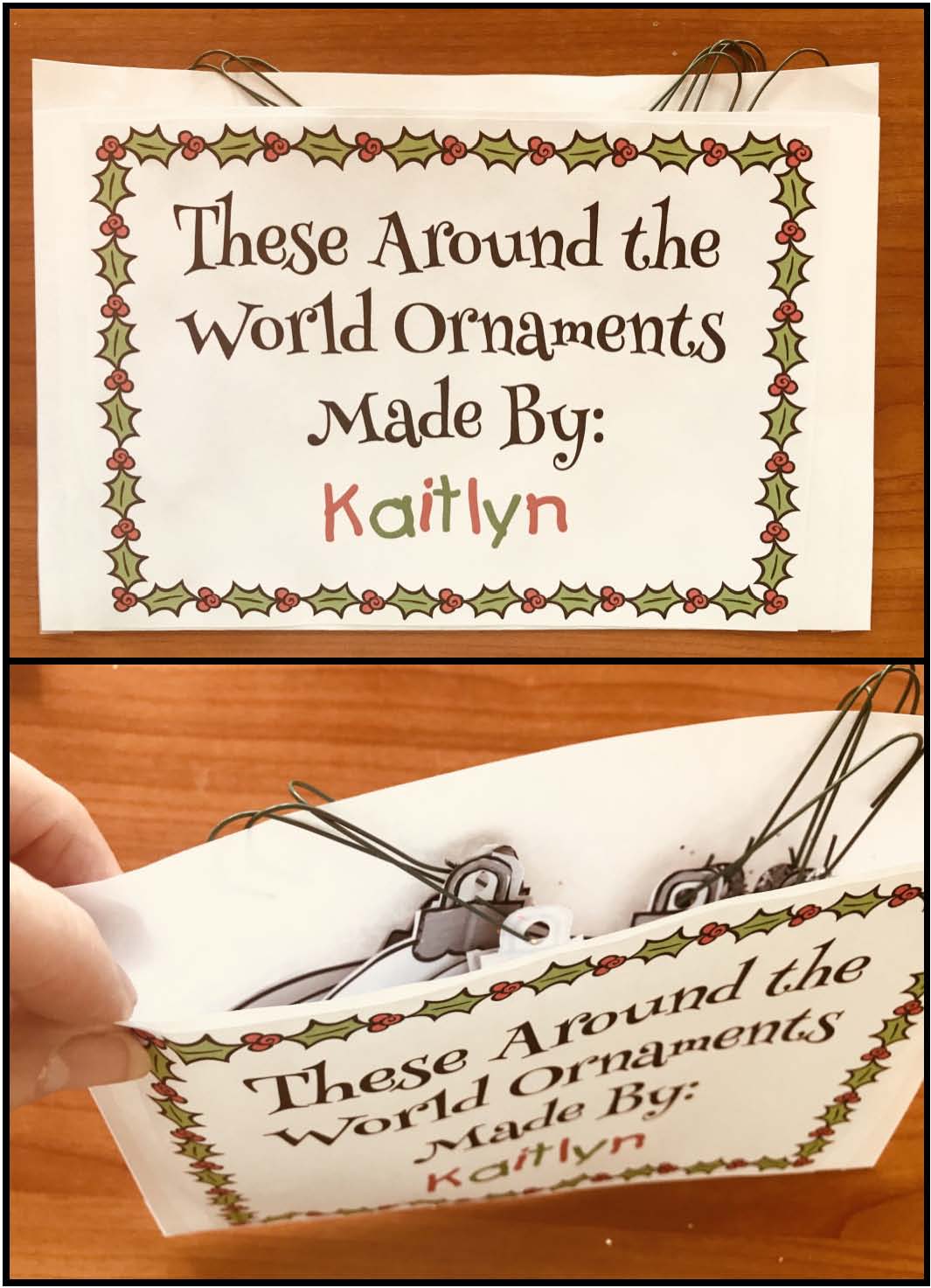 I've included a storage envelope children can tuck their ornaments in, to keep them from getting tangled.

Another option:
Each student can make the ornament that matches their “Country Report”. After they’ve finished their presentation, have them add their ornament to your classroom tree, or attach to a pine garland you’ve displayed as a border in the hall.

Besides the black & white patterns for students, I’ve also included full-color templates, so that you can quickly & easily make an example to share, to help explain what you want students to do.

You can suspend your set from the ceiling. They look wonderful swirling & twirling as you “study abroad”.

These countries match those in my “Travels Around The World” packets that I’ve posted thus far. 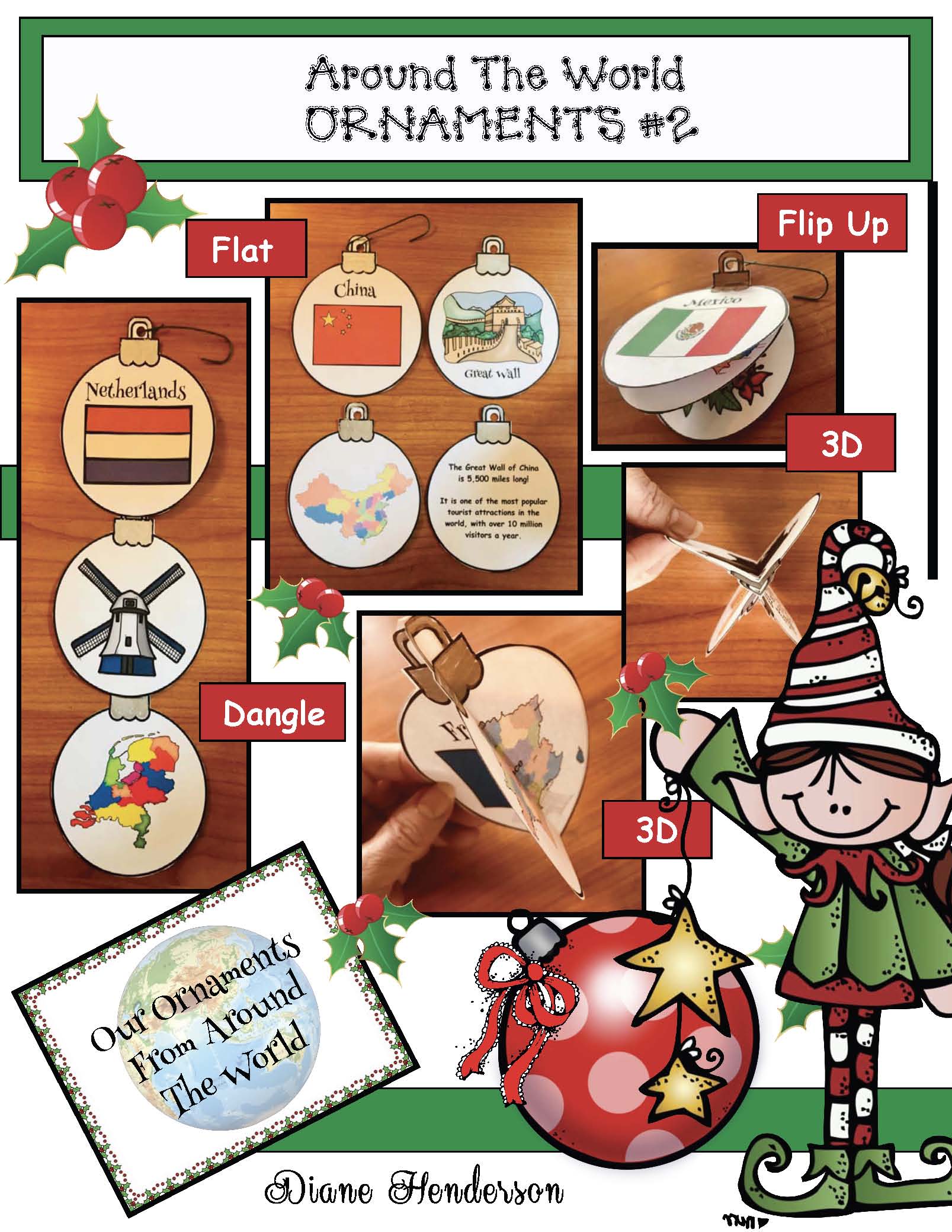 The 2nd ornament packet in the series, includes the following countries: 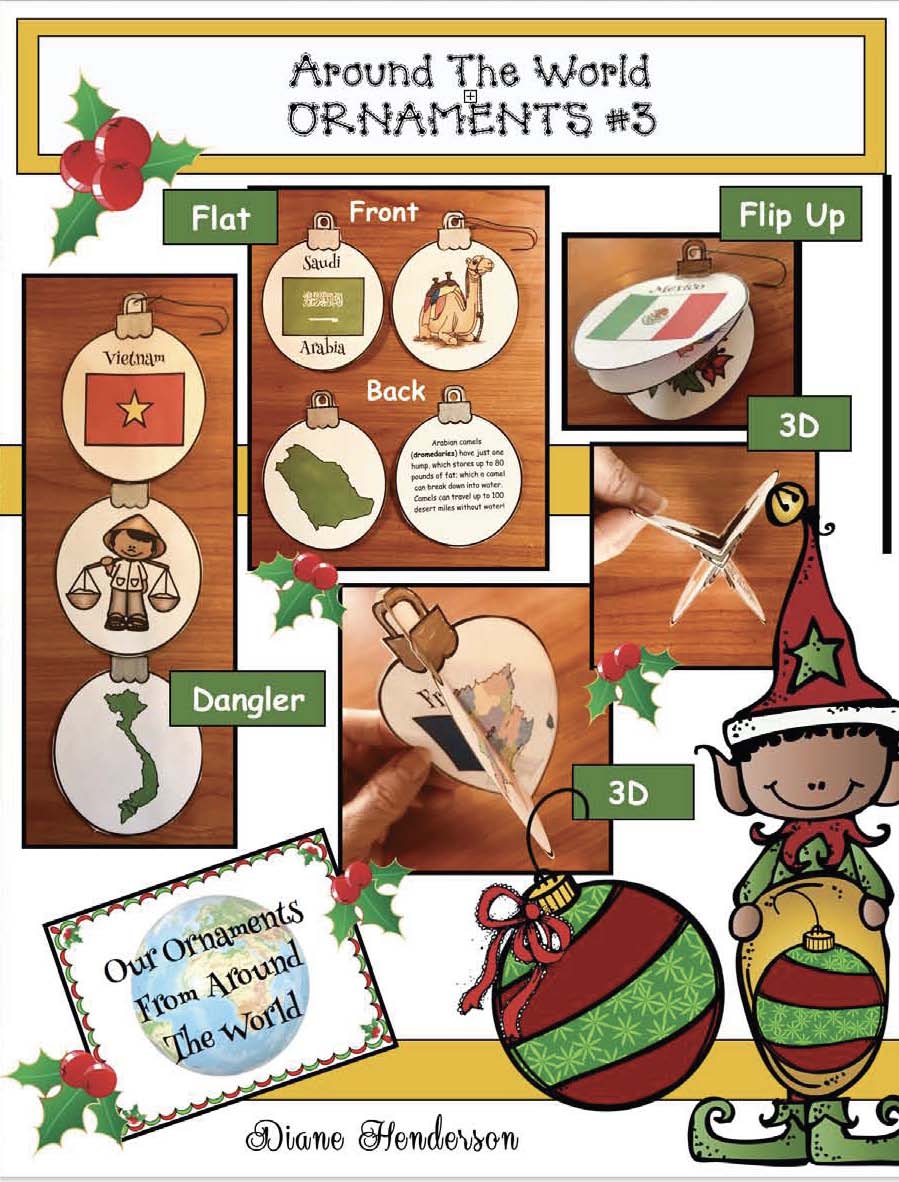 The 3rd ornament packet in the series, includes the following countries: 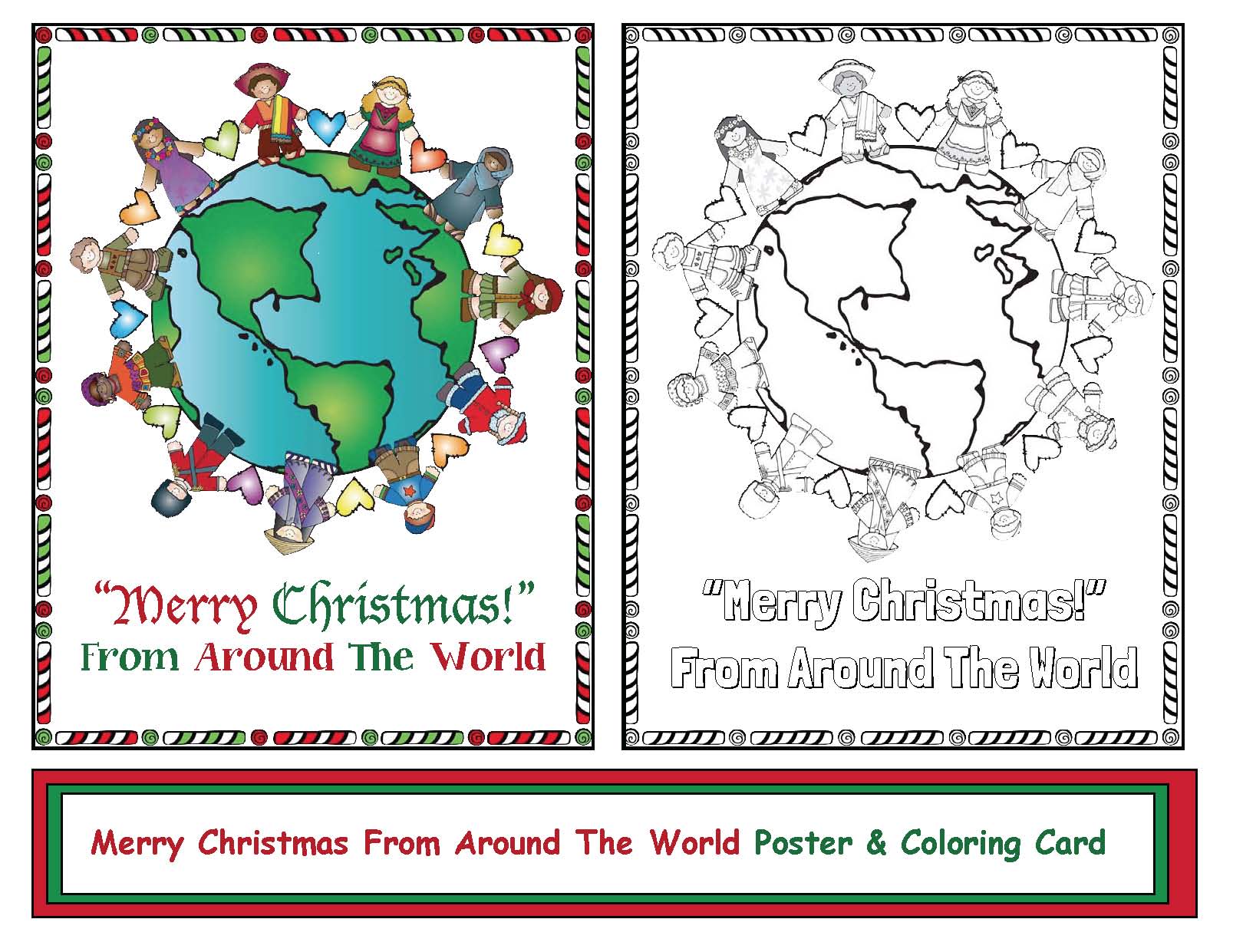 Today's featured FREEBIE is from my jumbo "Christmas Around The World" packet. It's a "color me" greeting card.  Hope you find it useful.

Well that's it for today. Thanks for stopping by.

My feet have hit the floor running this morning, as my "To Do" list is beyond long, but I'm excited to prepare for Thanksgiving.

Wishing you a relaxing and stress-free day.

"Gratitude is the inward feeling of kindness received. Thankfulness is the natural impulse to express that feeling. Thanksgiving is the following of that impulse." - Henry Van Dyke

Gratitude is the inward feeling of kindness received. Thankfulness is the natural impulse to express that feeling. Thanksgiving is the following of that impulse. Henry Van Dyke
Read more at: https://www.brainyquote.com/quotes/henry_van_dyke_40297
Tweet
Published in Getting to the Core
Tagged under

More in this category: « More "Needs & Wants" Activities Storytelling Craft For The Gingerbread Man »
Login to post comments
back to top