1-2-3 Come Play Some Christmas Relay Race Games With Me.

To build team spirit and cooperation I have my students do a lot of relay games. Here is an entire selection for you to choose from. Be prepared for a lot of hilarity as just staying in a line is quite a feat for some youngsters. TIPS: Have an adult captain for each team. As soon as each child has had their turn tell them to sit down, or they will be repeating. Make sure they get back into the correct line! Buy two bags of solid color stick–on bows, one set of red and one set of green.  Count the bows out to how many students you have in class. Toss them into a Christmas gift bag and then gather your students into a circle. Have them reach into the bag and pull out a bow. Have them peel off the paper and stick it onto their shirt.  They will either be on the RED or the GREEN team depending on what color bow they chose.  As soon as all of the bows have been put on have the children line up in two lines, a red and green one.  Their adult captains should also be wearing a bow.

Snowball Relay: Give each team a wooden spoon and a Styrofoam ball. They have to walk as fast as they can from the line at one end of the room around a garbage can at the other end of the room and back to the next person in their line and not drop the “snowball” on their spoon.  No touching the “snowball”.  If it drops they just pick it up and continue.

Skate To the North Pole Relay: Wrap two pieces of 12 x 6 pieces of tag board with waxed paper.  Have the children “skate” from one end of the room to the other on the waxed skates.  They come back and give the “skates” to the next person in line who does the same thing.

Present Run: The same thing as above only you are doing it with 4 wrapped shoe boxes for “shoes”. Cut holes in the tops of the boxes big enough for a child to fit his feet (without shoes on) into the wrapped boxes, one box for each foot. (4 boxes needed for 2 teams.) They shuffle along to the other end of the room and then back to their team mate.

Dress The Snowman Relay: You’ll need two of everything: A vest, A hat, A scarf, a pair of mittens. Let’s say each team has 10 members. 5 members will be snowmen and 5 will dress the snowman.  As soon as one pair has finished dressing their snowman and undressing him, the next pair has their turn.  The team that finishes dressing and undressing their snowmen first is the winner. 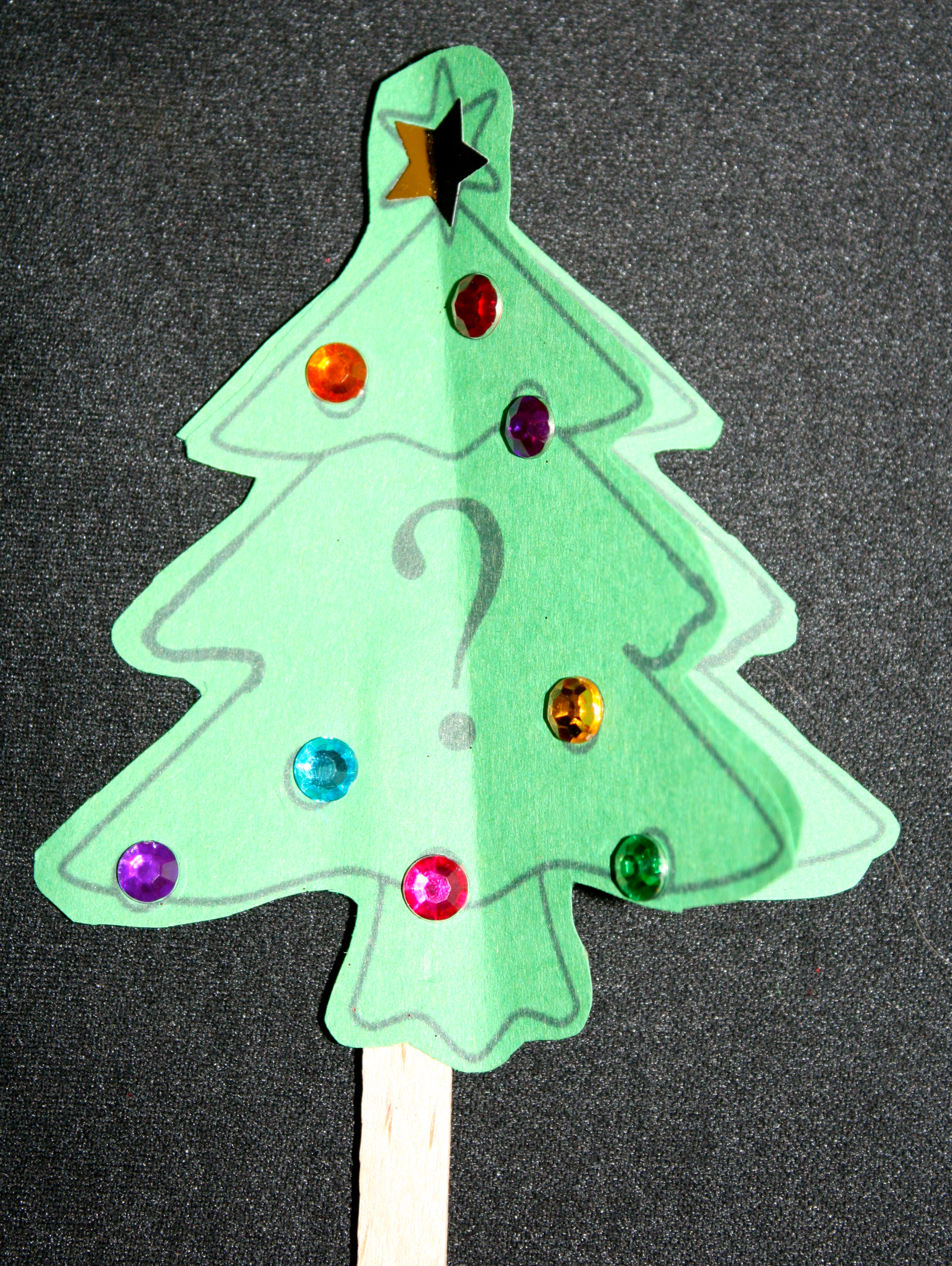 Organize the Ornaments Relay: The Dollar Store sells 18 plastic ornaments so you’ll need to buy two sets. Skip count number the two sets by 10’s to 100.  Put the ornaments in two baskets. Each member on the team has to walk down to the basket and arrange the ornaments in the basket from 10 to 100 in the correct order.  If you do not have this as a standard then do 0-10 or spell Christmas or whatever else is a standard for you.

Trim the Tree Relay: I have a “Slim Jim” Christmas tree that I bought 75% off after Christmas that’s perfect for this game.  Set it up at the front of the classroom.  Students are at the far end.  The two opposing teams will each get one side to decorate.  Give the 1st member an ornament to hold.  The first member on the team puts his ornament in the wooden spoon and races down and puts it on the tree. They get another ornament out of the basket, put it on the spoon and come back and give the spoon to the next person in line. The first team to get the side of their tree decorated is the winner.  You could skip the spoon and do it blind folded with a shorter distance to traverse if you wanted to.

Stack the Gift Boxes Relay: This is a bit of work, but teaches all sorts of small, medium and large “eye ball the dimensions” skills + once you’ve done the work you can always keep the presents year after year.   Wrap 10 packages of various sizes for each team. (This would be if you had 20 children in your class.  You would need more if you had more children.)  The packages will be stacked from largest on the bottom to smallest on the top.  Explain what the children need to do.  The first person walks down as fast as they can and puts the largest package down, the next person puts the next largest on top of that one and so on, ‘til the last person puts the smallest package on the top.  Easy right?  Not if they didn’t do it correctly and the packages are out of order in which case the person who put the wrong package on, has to go back and re-do theirs and so on down the line….The first team to get it correct is the winner.

Ornament on a Stirrer Stick Relay: Pick up enough coffee stirrer sticks at the local fast food eatery so that each of your students has one.   Have them hold it between their teeth.  The object here is to pass a small ornament from their straw to their partner’s straw.  So that this is not near impossible take a pipe cleaner and make a nice-sized loop on the top of the plastic ornament.

Remind students to be careful of each other’s eyes and have the straw and ornament far below the nose level and to take their time and go slow. No touching with hands! The team who goes through their entire line first is the winner. If you don't want to use the stirrer sticks have them put a larger ornament on their shoulder and hug it their with the side of their head by scrunching their neck and shoulders.  The object would be to get the ornament from their shoulder to the other person's shoulder or under their chin without using their hands.

Fill the Stockings Relay: Give each child a block, unifix cube whatever you have in your class. Hang two stockings at the end of the room.  The first child in each line puts whatever they have on a wooden spoon and walks it as fast as they can down to the stocking and puts it in and then scoots back and gives the spoon to the next person in line. The team who goes through their entire line first is the winner.

Blow the Snowball Off the Table Relay: Give each student a straw and cotton ball (snowball).  Have the lines on either side of a long table so they can cheer each other on. The children who are playing are in front of their team mates at the table.  The object is to keep their snowball (cotton ball) on the table, but to blow it across the table using their straw, so that it flies over the edge on their opponent’s side.  The next person in line then goes up with their snowball and straw and does the same thing. The team who goes through their entire line first is the winner.

Snowball Blower Relay: This is similar to the cotton ball relay but this is using a toilet paper roll.  To make these look pretty, have a room mom helper wrap enough toilet paper rolls in aluminum foil and give one to each student.  Assemble the children as with the above table.  Tape a paper cup to each side.  The object is to get the ping pong ball or Styrofoam ball into the cup. Each time a student does, the team scores a point. The team with the most points is the winning team. 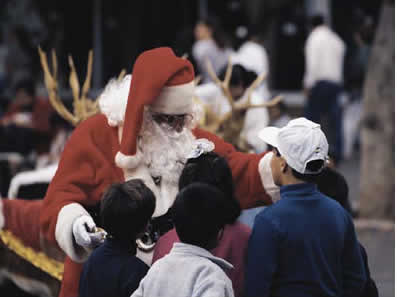 Pass Santa’s Sack Relay: You’ll need two of everything: a pair of gloves, enough gum in a pack for each child to get a stick, a Christmas Baggie or something that can be used as Santa’s sack.  (I made a black sack using black felt specifically for this game.) Children are sitting in two lines.  Explain what they are to do by showing them. Put on Santa’s gloves, take out a stick of gum from the opened gum pack that is in Santa’s sack,  put the gum back in the sack, unwrap the gum, put the wrapper in Santa’s sack, chew your gum, take off the gloves, pass the gloves and sack to the next person.  The team who goes through their entire line first is the winner.

Santa Said Secret: Have the two lines sit down. Whisper the same message into each ear of the first person in each line. They whisper it to the next person and so on.  The message begins with: Santa said. It can be as complicated or as simple as you think your students can handle.  The team with the correct sentence or as near to the correct sentence is the winner.

How Many Words Relay: Teams are sitting at a table, or on the floor.  One student is designated as the secretary for each team.  Remind them to be very quiet as they don’t want the other team to hear their answers.  Children have 3 minutes to think up as many words as they can that can be made out of the words Merry Christmas.

What’s In The Stocking? This can be done as an individual thing or as a team game.  Have two stockings with 10-15 identical things in each stocking.  Children are sitting on the floor in two lines. Each person has 15 seconds to feel what is inside the stocking and then passes it on to the next person. They write down as many things as they can remember. As soon as everyone on their team has gotten a turn to feel what’s inside they get into a huddle and share their findings their “secretary” writes things down and numbers them. The team with all the things listed or the one with the most is the winner. These things need not be Christmas.  You may want to throw in a few “zingers” that are hard to figure out.

I hope you got some ideas for your party or the last day of school.  I think games are a terrific way to teach all sorts of life skills.  You may want to save this article and adapt the games for Valentine’s Day. You know that will be here sooner than you can say

Merry Christmas and Happy New Year to you!