When two vowels go walking, the first one does the talking

1-2-3 Come Work On Vowel Digraphs With Me

I think most everyone has heard the reading rule “When two vowels go walking, the first one does the talking.”  It was probably thought up by a teacher or parent who was trying to make learning to read a bit easier.

I learned this rule, and I’ve also taught this rule.  While doing so, I made sure that my students said, “but not all of the time.” after they repeated the rhyme.  For as we all well know, the English language has many aggravating exceptions to our rules.

It’s one of the reasons non-English speaking people have a rather difficult time sorting through all of it.  Just as soon as they learn that cute little ditty, they trip over said, weight, shoe and so one.

Keeping that in mind, I wanted to discover what sort of percentage the rule had at bat.  After about an hour of surfing and many articles later,  I was surprised to find that educational gurus gave this rule a rather low score. Averages for being “correct” ranged anywhere from as high as only  57% to as low as 36% depending on their word list.

One must also keep in mind that if you list all of the possible vowel digraph combinations (two written vowels together that make one sound), the results also vary.

Clymer’s study (1963/1996) seems to be the most referred to reference; he found that when two vowels appear side by side, where the long sound of the first one is heard and the second is usually silent, happens only 45% of the time!

I let my students know that the ai, ea, ee, and oa digraphs, have the most success with this rule.  Some teachers also like to add the ie digraph, and although I can think of quite a few examples where it’s true, (pie) I can think of many more words that are an exception to the rule. (piece)

Prompted by a request, I decided to make a "When two vowels go walking..." packet.  In it, I’ve provided a list of words with the above vowel digraphs that are age appropriate.

Quite a few teachers seem to be calling these "team words" as the vowels work together like a team, to make one sound.  Starfall.com, a popular educational site, also refers to them in this way.

To provide more teachable moments, and build vocabulary, as well as practice spelling, I’ve also included a list of words that are exceptions to the rule.  I call them "rule breakers."

To make coming across exceptions less frustrating and more fun, have students toss these rule breakers into jail.

Instead of moaning and groaning that they’ve found another exception, they will take delight in tossing those words into a cell.

I've included empty jail cell templates for the ai, ea, ee & oa vowel diagraphs, as well as filled-in ones for you to use as an example, after your students have completed theirs.

Bobbi, a visitor to the site, e-mailed me an adorable walking vowel bookmark,  she did not know the source, and despite some effort, I could not find it either, so I made up my own version.

There are several tops and bottoms your students can choose from.

The vowel digraph “body” also has several options, and comes filled in with the ae, ea, ee, and oa pairs, a blank set, where you can have your students fill in other vowel digraphs that you want to cover, as well as a pattern, where students choose a vowel pair and then list examples of words in the empty boxes.

I've included filled-in teacher samples too.  Click on the link to view/download the When two vowels go walking... packet. 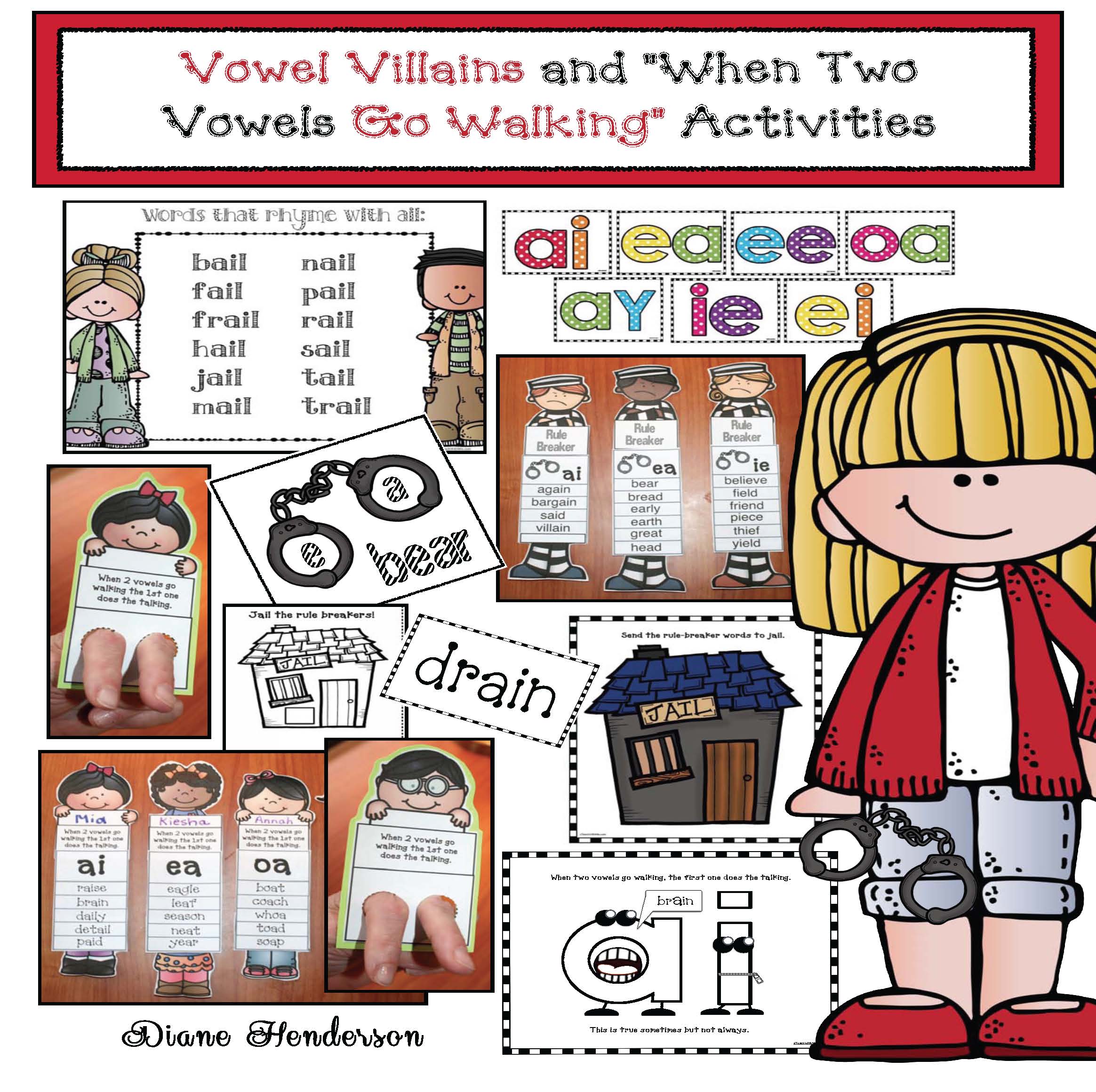 This packet will be FREE for an entire year, after which time it will be revamped and then put into my 137-page jumbo "Vowel Villains & When 2 Vowels Go Walking" packet.

I'm forever searching YouTube to see if some creative person has posted something that will help students learn. I found 3 rather short and very cute videos about the When two vowels go walking... rule.  The pictures are screen shots from those clips.

I think that PBS does the best job at grabbing children's attention with their catchy "When two vowels go walking..." song.  In fact, some say that it is one of their most popular tunes.  It's from their Emmy-winning literacy education series, Between the Lions. Click on the link to view this less than 2-minute video.

Another adorable clip, was made by a creative teacher and her sweet kindergarten kiddos.  I love the fact that she had them make vowel t-shirts, so they truly could walk side-by-side.

I'm sure they all had a great time making this 1.54 minute video.  Click on the link to view the kindergarten vowels go walking.

Starfall, (one of my favorite sites for kids) also did a good job of portraying two vowels walking. Click on the link to view this less than 3-minute video.  Starfall's When two vowels go walking...

If you'd like some anchor charts of the most popular vowel digraphs that fit this rule, click on the link When two vowels go walking..." poster packet.

Use them as anchor charts to hang in your room, or run some off for your students and have them write a list of words that conform, on the back.

If you're looking for a few more vowel activities, The Vowel Owl packet is a popular download: Students sort the 570 CVC & Dolch word cards  into the various long and short vowel owl cups, making it a fun "Word Work" activity for your Daily 5.

I've also included a Vowel Howl game board, as another fun option for practicing long & short vowel sounds.  Click on the link to view/download the Vowel Owl packet.

My personal favorite vowel activity is the Old MacDonald Had Some Vowels packet.

My Y5's, kinders and 1st graders, all enjoyed singing the song and substituting the EIEIO with the vowels AEIOU.

Because children are familiar with the tune, the emergent reader booklet, is a fun way to reinforce long and short vowels.

The repetitious-simple sentences, are filled with common Dolch sight words.

Click on the link to view/download the Old MacDonal Had Some Vowels packet.

Finally, for a set of vowel anchor charts/posters click on the link.  To take a look at all of the vowel FREEBIES on teachwithme.com click on the link to pop on over to that section.  Simply scroll down to pick and choose.

Thanks for visiting today.  I hope you found some useful items. Wishing you a stress-free day.

"Curiosity is the very basis of education and if you tell me that curiosity killed the cat, I say only that the cat died nobly." -Arnold Edinborough

Three posters with the most popular vowel digraphs that fit the "When two vowels go walking..." rule.  Use them as anchor charts, or print the posters off for your students and have them write examples of words that they find that apply to this rule.  These vowel posters are a special FREEBIE in my TpT shop.  Click on the link to pop on over to grab them today. 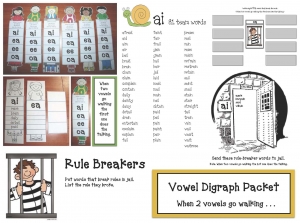 If you teach the rule, "When two vowels go walking, the first one does the talking." you'll enjoy these "craftivities." This packet will be FREE for an entire year.  After which time it will be revamped & become part of my 137-page jumbo "Vowel Villains & When 2 Vowels Go Walking Packet" in my TpT shop.