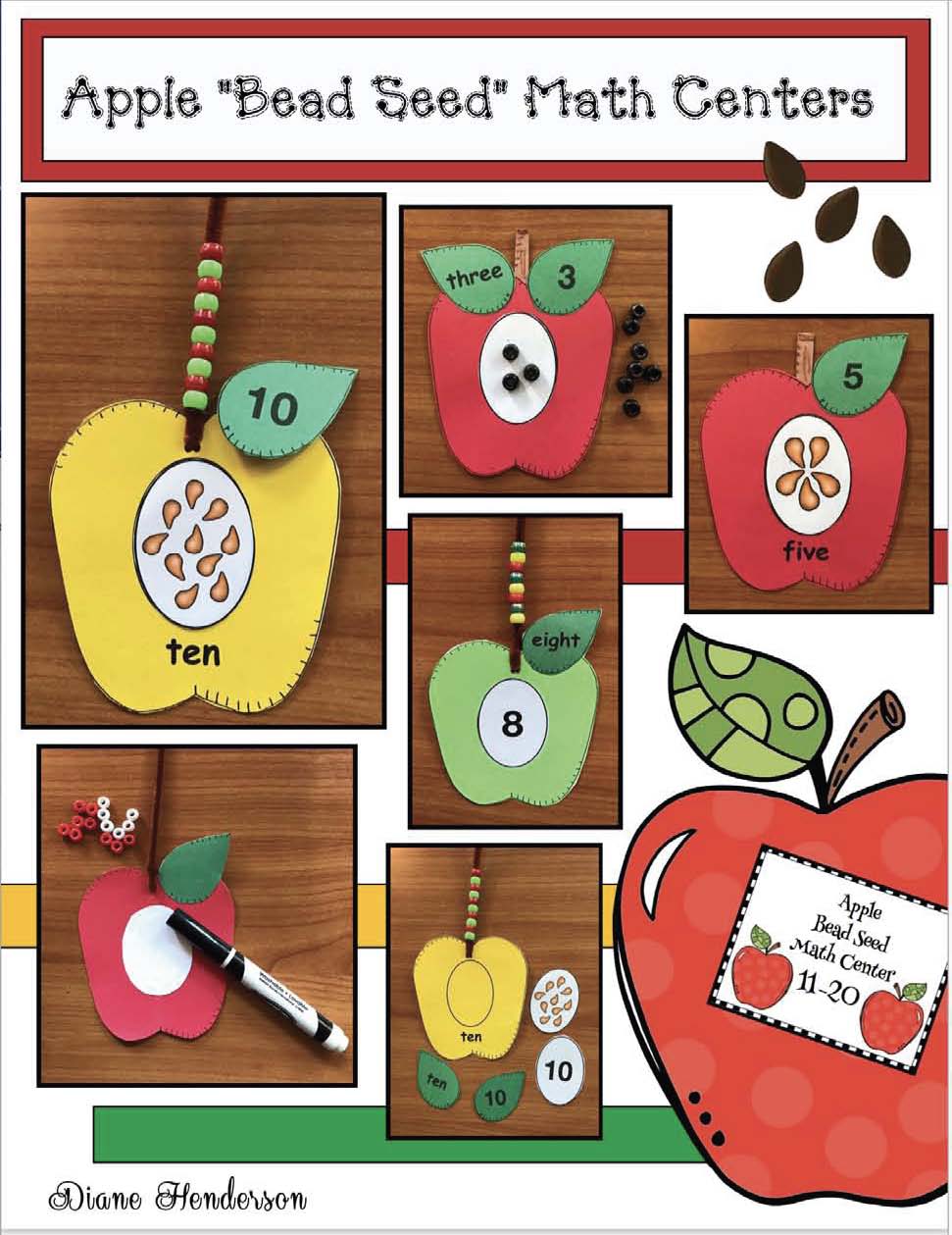 I never mind putzing a bit to make a math center because once you’re done making your activities things are easy-peasy. 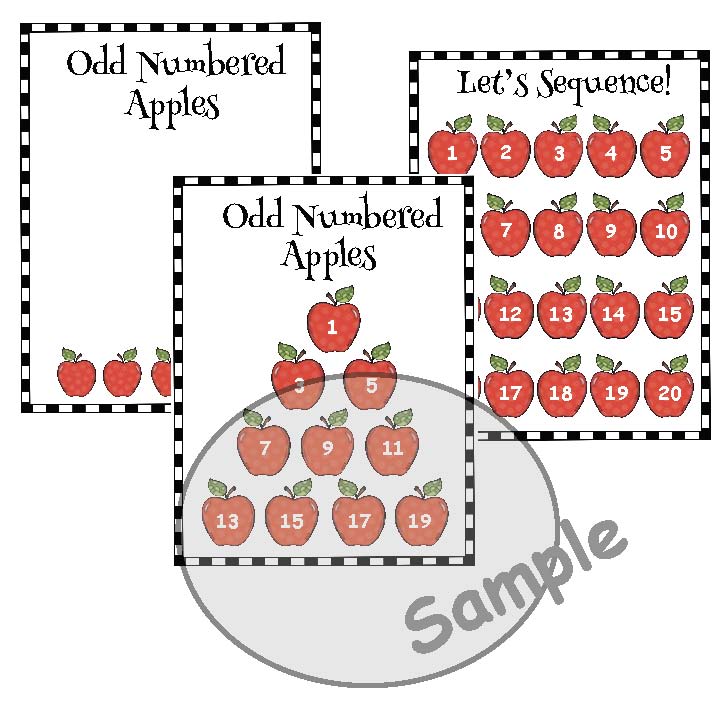 I designed this packet so students are empowered because they set up the center, do the activity independently, check their work via the answer-key posters, make corrections if needed, then put things back where they belong.

No more prep for you, so you’re freed up while children are happily engaged.

Plus you can reuse this “apple-icious” math center every year. Woo hoo! 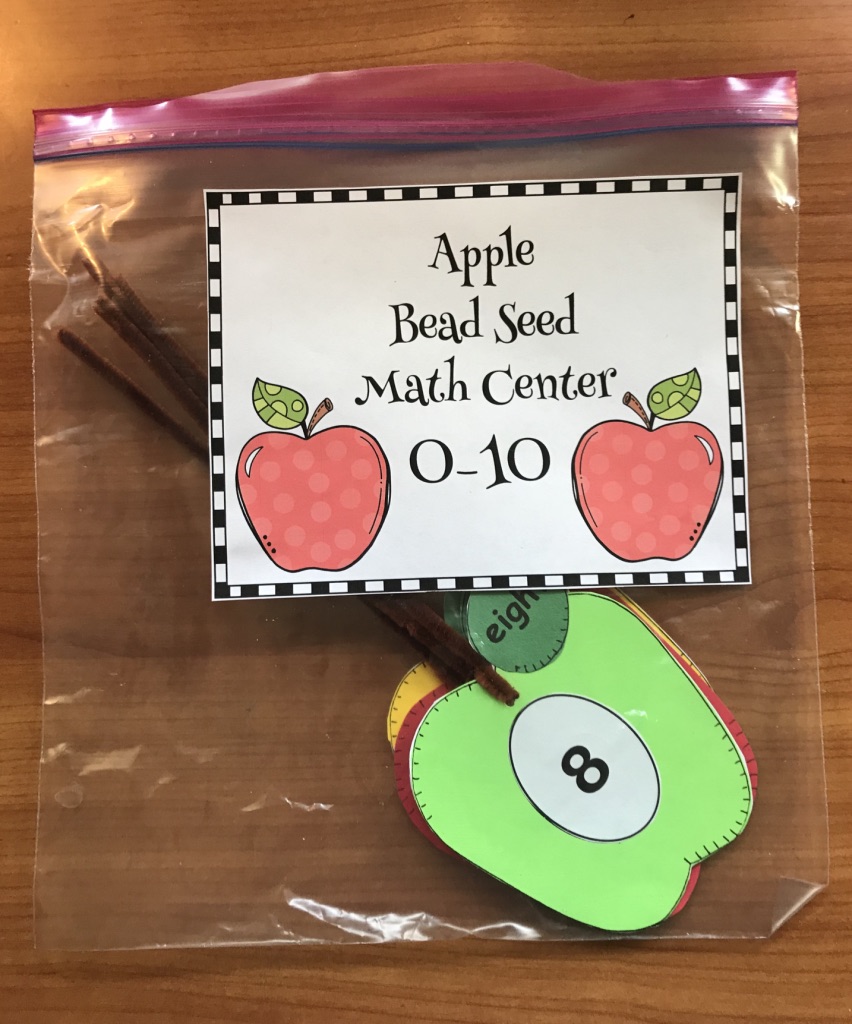 I keep my apples with a pipe cleaner stem in a large ZipLock Baggie and have included labels so you can separate the 0-10 apples from the 11-20 ones.

I created the patterns in such a way that you can easily diversify your lessons, while practicing a variety of standards such as:

There are so many independent center options that I've included a list of suggestions. 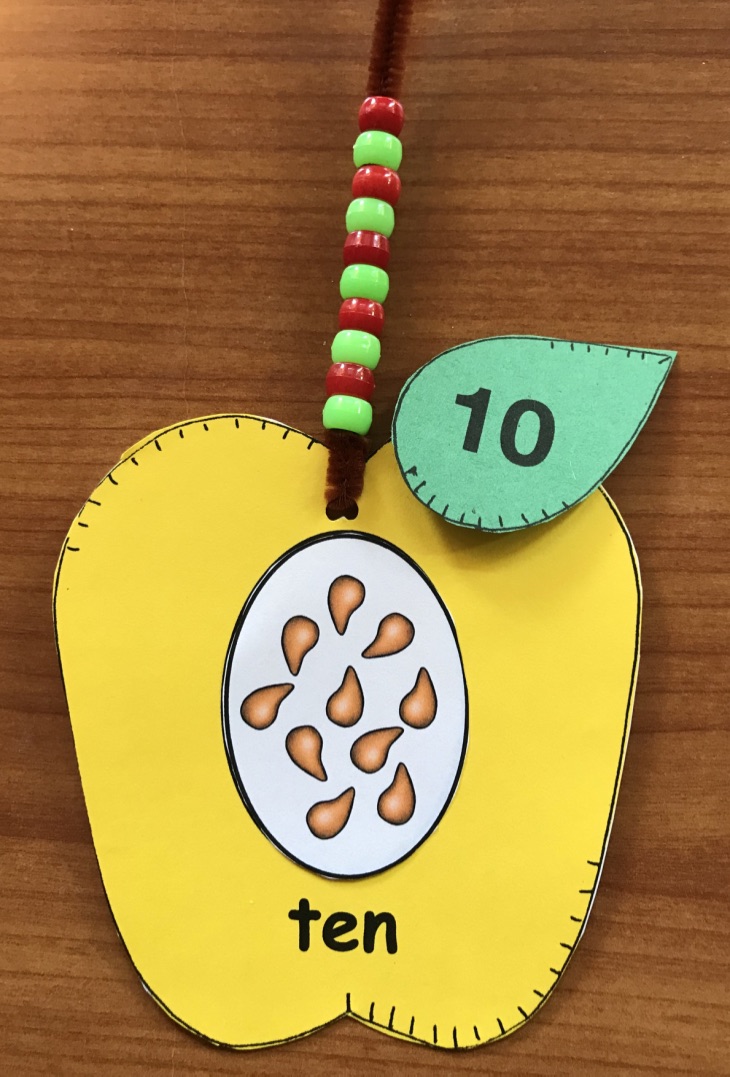 For example, I have one set of apples where I've glued the number leaf and mathcing oval set of seeds to an apple, which is labeled with that number word.

For this math center students count and string that many beads on the pipe cleaner stem, which matches the appropriate numbers on the apple.

They can use all one color, or show me an AB-AB or ABC-ABC color pattern. 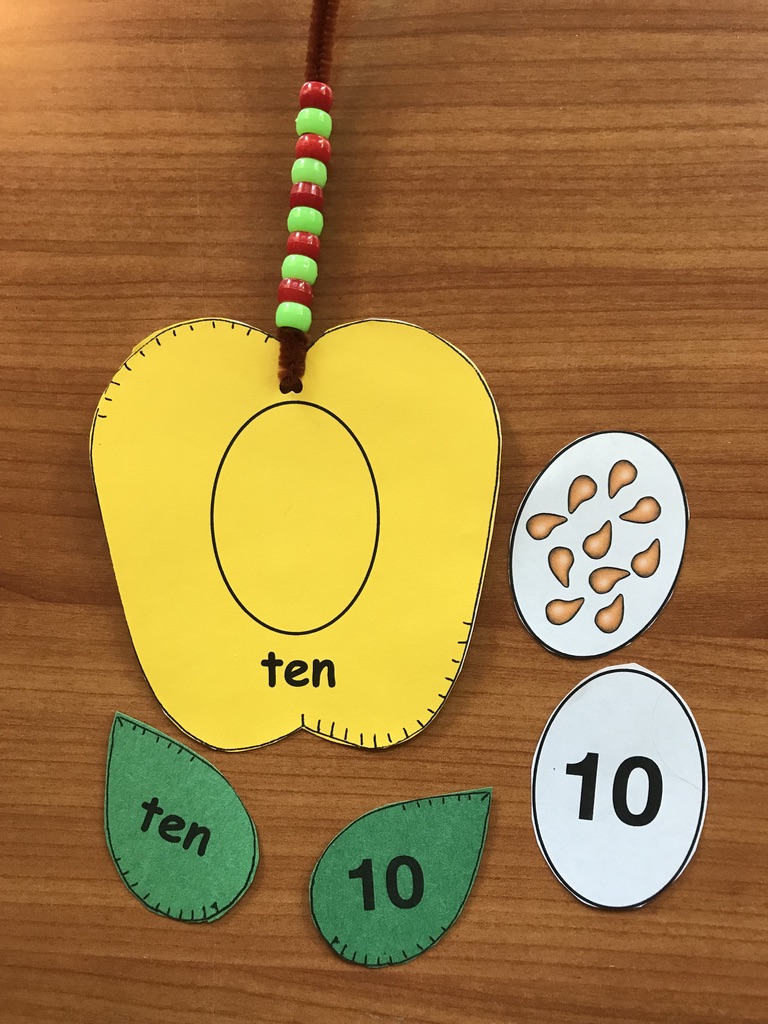 For another activity, the leaves and center options are laminated, then individually cut out.

Children match the leaves and various centers to the appriate apple.

Even though I'm not teaching reading to my Y5s, I still put the number words on the leaves and apples.

They enjoy these games so much, that the continued repetition of seeing number words associated with a specific number, eventually sinks in by association, so many start reading those words on their own!

You can also use the patterns to make a set of apples without a pipe cleaner stem. I simply glued on a strip of brown paper. 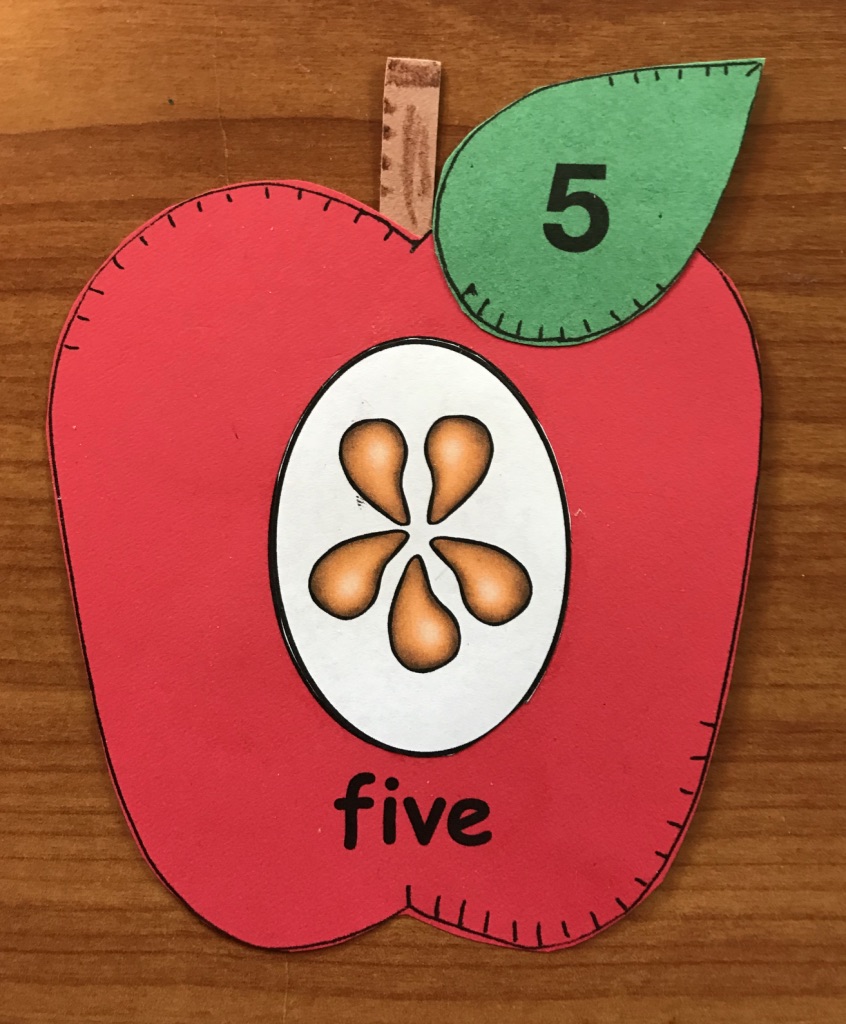 We use this set for sequencing the numbers from 0-20, as well as sorting them on the odd or even number mats.

To reinforce the fact that apples can be red, yellow and green, I make a set of each color.

Students can make matches with the apples, (great for "Memory Match" or "I Have; Who Has?" games) as well as showing a row of color patterns. 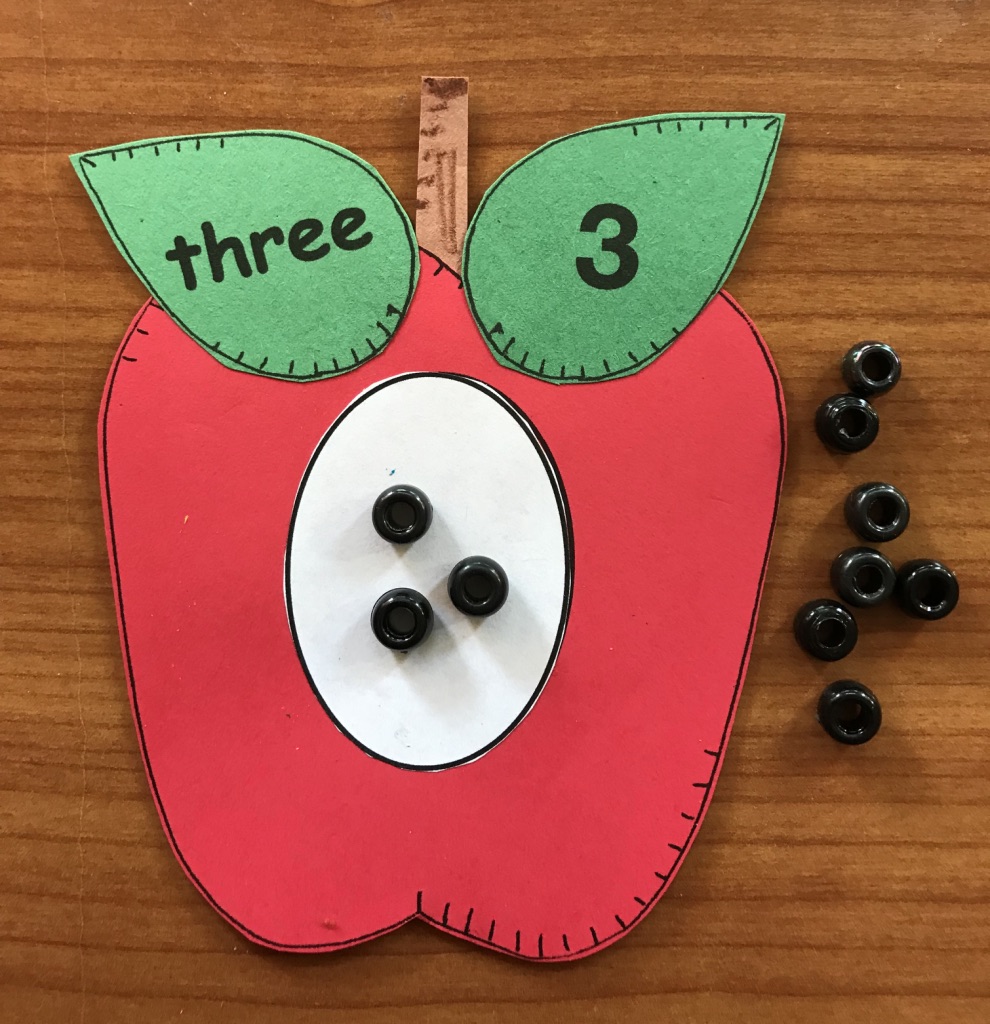 For another set of apples, I glue a blank white oval to the center.

Children pick a number leaf, place it at the top then use black or brown pony beads to make a group of that many "seeds", which practices counting, making groups/sets, number recognition, plus one-to-one correspondence! 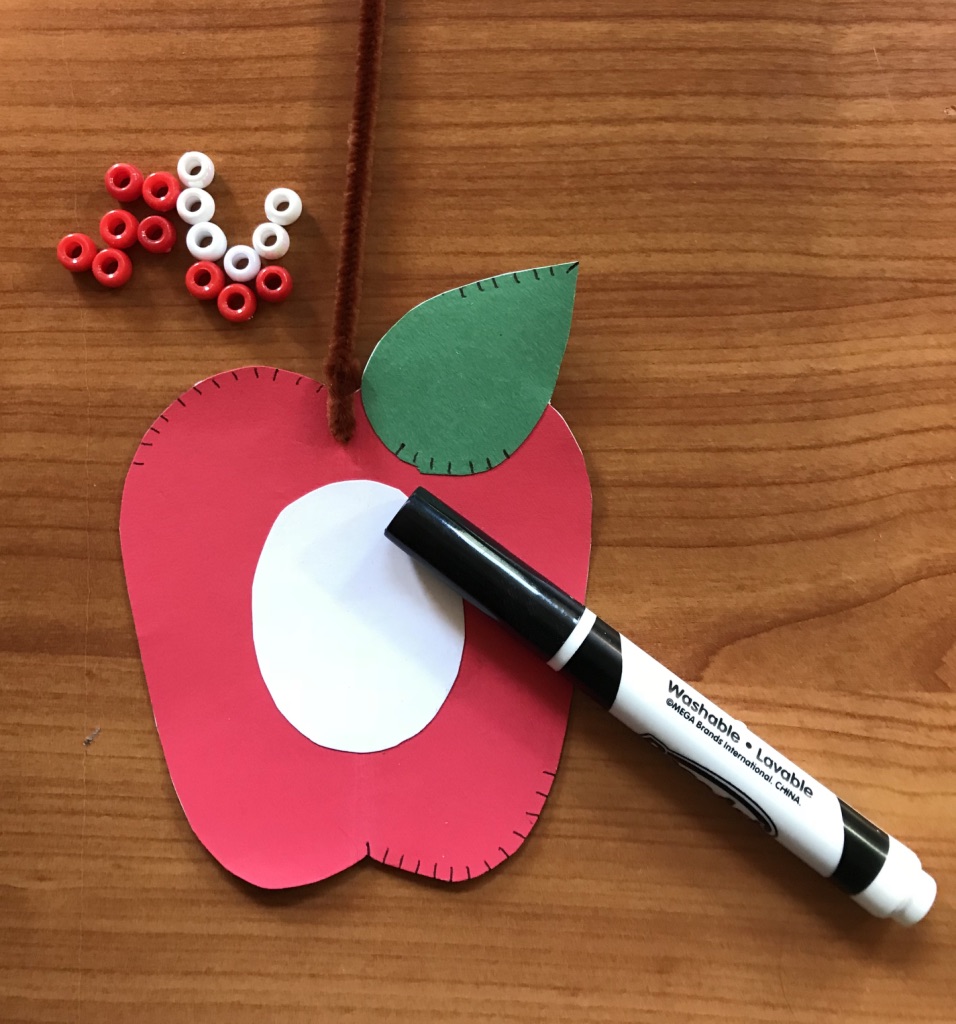 Besides using the variety of pattern choices for activities in your math center, you can laminate a class set of blank apples, as a quick, easy and super-fun way to whole group assess.

Call out a number. Using a dry erase marker,  students write that number on their leaf, and make that many "seed" dots on the center oval, then place that many "seed beads" on the pipe cleaner stem.

When they are done, they hold their apple in the air.  You can see at a glance who is having difficulty.

This is an inexpensive and easy enough craft, that students could also make their own apple, then take it home for continued practice there. 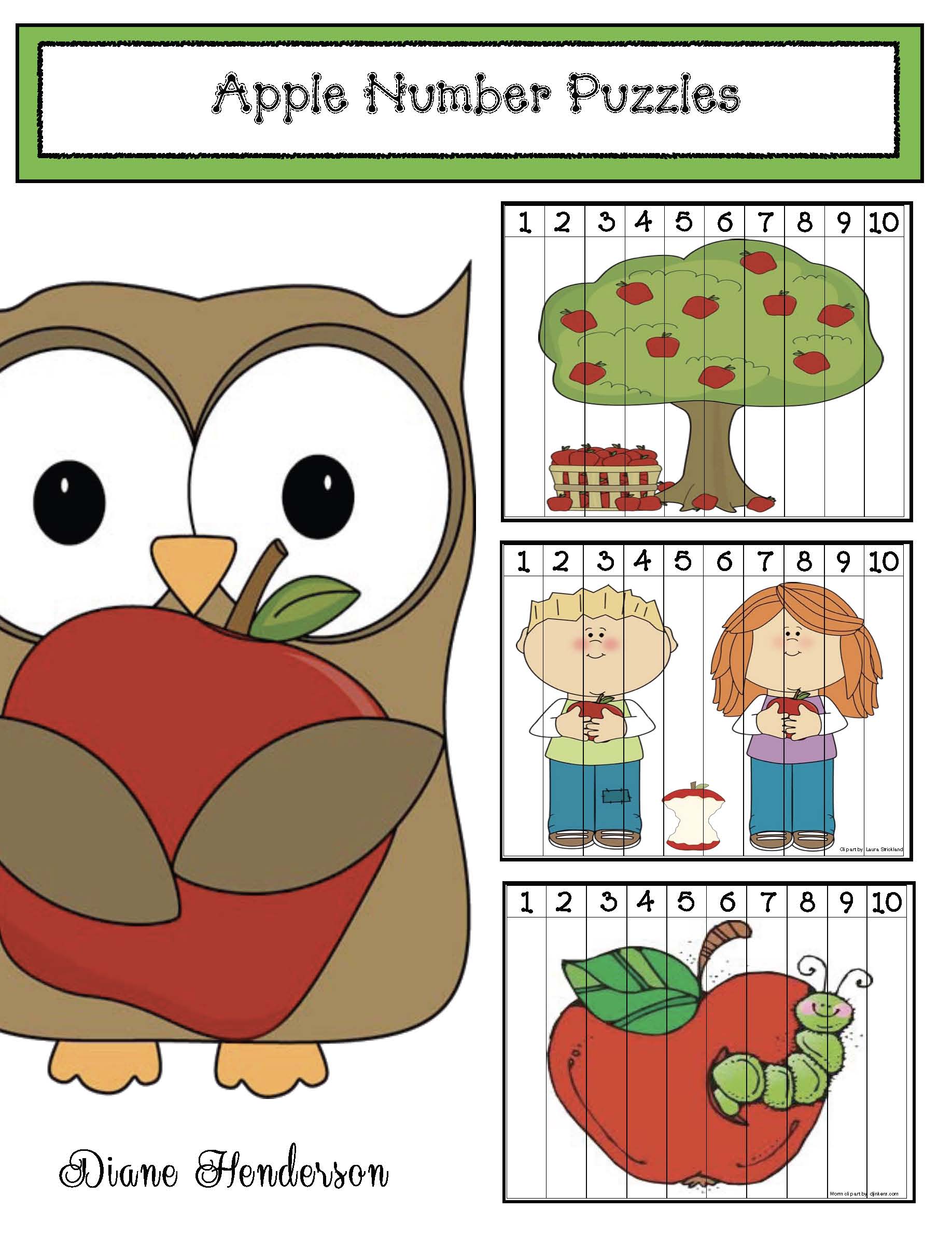 As with my other math centers, I keep each one of the puzzles in their own ZipLock Baggie.  I hope your kiddos enjoy these apple strip puzzles as much as mine do.

Well that's it for now. Thanks for stopping by.

I'm heading out to the farmer's market.  Mmmm mmmm I can just taste that apple cider.

Wishing you an awesome autumn.

"Millions saw the apple fall, but Newton was the one who asked why!" -Bernard Baruch

Since the apple and pumpkin shape games, as well as the apple and pumpkin number games, were such a huge hit, I decided to design some for the rest of the popular fall themes.  There are sets for leaves, spiders, bats, owls and turkeys.  If I've missed a theme that you do, and would like games for, simply shoot me an e-mail: diane@teachwithme.com and I'll see what I can do.

Number words were always part of my word wall.  I found that the more contact my students had with these words, the easier it became for them to automatically recognize and read them.  Playing word games made learning them interesting and fun.  To make the games, print off the cards, laminate them and then trim.

Students clip a clothespin to the number that matches the number word on the themed-card.  So that students can self-check, put an X on the back of the card in the location of the correct answer.  I kept clothespins in a tub and games in their own separate Baggy.

There's a blank set of cards for each theme, so that you can program higher numbers, or use for whatever.  Click on the link to view/download the Fall Themed Number Word Clothespin Games.

To go along with the apple and pumpkin shape games, I also made 5 more fall-themed shape matching games.   They too include the above sets: leaves, spiders, bats, owls and turkeys.

Run off the shape template on a variety of colors of construction paper; laminate and trim.  Students place the colored shape tile onto the matching shape on the themed card.   The shapes on the cards also include the shape word, to help reinforce word recognition as well.

I've included a blank set of cards with these sets too, so that you can program them with more shapes or whatever.  Click on the link to view/download the Fall Shape Matching Game packet.

Thanks for visiting today.  I design and blog every day, so I hope you can stop by again tomorrow, for the newest FREEBIES.  Feel free to PIN away.  I think sharing makes everyone's life easier.    If you'd like to see all of the educational items that I pin, click on the heart to the right of the blog.

"This above all else: to thine own self be true." -William Shakespeare

Games are a wonderful way for students to practice important life skills.  They are also a quick & easy way to grab and hold children's interest, while they review and reinforce a variety of standards.   One of my little ones summed it up: "We didn't even know we was learnin' cuz we was havin' so much fun!"

Because subitizing (being able to "know" how many there are, without counting) is extremely important; playing with dominoes and dice, are a great way to help students recognize these groupings at a glance.  Before too long, I could flash 6 dots (in the pattern on a dice/domino) and my students would call out the number 6, without having to stop and count the dots.

Keeping this in mind, I designed 6 pumpkin-themed dice games + a listening and following direction activity, that will help review ordinal numbers. They are all in one Pumpkin Games packet.  To view/download it, click on the link.  Because the rules are pretty much the same, students feel empowered, as they know what to do, and can get down to business, and you aren't using up valuable minutes explaining things for the umpteenth time.

Because the apple basket counting game, was a popular download, I decided to revisit that concept using pumpkins.  Print off the farmer's wagon on brown construction paper, laminate and trim.  Do the same thing with the pumpkin tile master.  Have each child take 20 pumpkin tiles, (or to expedite things, have 20 pre-counted and put in Snack Baggies. After children have played the game, to make sure that they have 20 pumpkins, have students count them one at a time into their bag.) This is great counting practice for little ones, and also ensures that you don't have incomplete games, because pumpkins fell on the floor.

Children choose a partner and share the wagon.  The object of the game is to get all of your pumpkins into the wagon, by taking turns rolling the dice.  Whatever number a child rolls, is how many pumpkins they pick up from their pile and place in the wagon.  You can make the game more difficult, by having students roll an exact number towards the end of the game.  i.e. if they have only 1 pumpkin left, they need to roll a one.

In the game "Roll and Color," children roll a dice.  Whatever number they roll, is the matching numbered section on their pumpkin, that they color.  The first child with a completly colored-in pumpkin is the winner.

"Roll and Draw" works with the same rules, only children draw a shape on their pumpkin to make a Jack-O-Lantern.  This is a great opportunity to review a square, triangle, circle and rectangle, and possibly introduce the crescent shape as well.

Because 5 Little Pumpkins Sitting On a Gate, is such a popular rhyme/story in October, I thought it would be fun to follow it up with a game.  To conserve paper, you can print, laminate and trim the gates.  If copying is not an issue for your school, it's nice if each child can have their own "gate" so they can continue to practice at home.

Run off the pumpkin master.  Students color and cut out their pumpkins and place them on the gate.  When you are explaining the game, you have a great opportunity to review ordinal numbers as well.  Children take turns rolling a dice with their partner.  Whatever number they roll, they take the matching numbered pumpkin off the gate and have it go "rolling into the night..."  The first child who gets all of their pumpkins off the gate is the winner.

Pumpkins in a Row on a Roll is similar.  Children color the numbered pumpkin that matches the number that they roll.  I also made an ordinal number activity with this same template.  This is wonderful practice for listening and following directions too, as the teacher reads what (s)he wants students to do.

Finally, children trace the numbers and color their pumpkins as they take turns rolling the dice in Pumpkins On A Roll . Simply run off the template, trim and give each student a strip of pumpkins.  Click on the link to view/download the Pumpkin Games packet.

Thanks for visiting today.  I blog daily, so I hope you can pop back tomorrow for the latest FREEBIES hot off the press. Feel free to PIN anything from my site.  I think sharing is so important, and truly appreciate everyone's creative abilities, that help us roll with it"  rather than spend time, we don't have, reinventing the wheel.  To ensure that "pinners" return to THIS blog article, click on the green title at the top; it will turn black, now click on the "Pin it" button, located on the menu.  If you'd like to take a peek at my awesome educational boards, click on the heart to the right of the blog.

"A college degree and a teaching certificate, may define a person as a teacher, but it takes hard word and dedication to truly be one." -Evan Esar